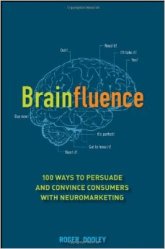 When I read books, I typically do so on my phone or tablet, highlighting sentences or paragraphs that make a good point.  I don’t recall reading a book recently where I highlighted as much as I did with Roger Dooley’s book Brainfluence, “100 ways to persuade and convince consumers with neuromarketing.”  The book is chuck full of interesting case studies that can essentially be boiled down to one theme: Our decisions are influenced on a subconscious level far more than we realize.  The following are some of my favorite passages from the book that illustrate this principle with regard to marketing.  Yes, there are a ton, but honestly, this represents just a small portion of the interesting learnings I gleaned from this book.

Reduced the frequency and pain of paying by making it simple and easy:  “Why do people love to prepay for things or pay a flat rate for things? Again, it mutes the pain of paying. The worst-case alternative is when you pay for sushi and you’re paying per piece. Or watching the taxi meter; you know how much every inch of the way is costing you. Marketers have realized this for years, and they have responded with offers designed to minimize the pain associated with buying their products. All-inclusive meal options are popular at many eateries. Netflix crushed its video rental competitors in part by its “all-you-can-watch” price strategy. Cruises have surged in popularity in part because they deliver a vacation experience for a fixed price. In each case, the marketer offers a single, relatively attractive price that removes additional pain from the buying experience.”

Use and anchor price strategy to position a product:  “Apple’s iPhone introduction is a good example of using anchor pricing to keep demand strong. When they first released the iPhone, it ranged in price from $499 to $599, establishing the initial anchor for what the unique product should cost. To the chagrin of early adopters, Apple dropped the price by $200 after only a few months, creating an apparent bargain and stimulating more sales. When they introduced the iPhone 3G, pricing was as low as $199, and they sold one million phones in three days. A key benefit of this strategy for new products is that a high anchor price is established in the minds of customers, making each subsequent reduction a bigger bargain.”

It’s not reality, it’s the perception of reality that matters:  “It might be surprising to find out that wine thought to be more expensive really does taste better at the most fundamental level of perception. Researchers at Stanford University and Caltech demonstrated that people’s brains experience more pleasure when they think they are drinking a $45 wine instead of a $5 bottle, even when in reality it’s the same cheap stuff! The important aspect of these findings is that people aren’t fibbing on a survey; that is, they aren’t reporting that a wine tastes better because they know it’s more expensive and they don’t want to look dumb. Rather, they are actually experiencing a tastier wine. The price (or what the subjects thought was the price) actually changed their experience with the product.”

Offer an inferior option to boost sales: “Need to sell more of a product or service? Here’s a counterintuitive idea: offer your customers a similar, but inferior, product or service at about the same price. While it’s unlikely that they will actually buy the less attractive item, you may see a jump in sales of what you are trying to sell.”

Fewer choices are better than many: “Consumers must like lots of choices—why else would there be hundreds of shampoo brands and variants on a typical supermarket shelf? Actually, it’s been known for years that too many choices can reduce consumer purchases. A study at Columbia University compared consumer behavior when confronted with a selection of either 6 or 24 gourmet jams in an upscale grocery store. The bigger selection did indeed cause more customers to stop and check it out—60 percent looked versus 40 percent for the limited selection. The interesting part, though, was the purchasing behavior. Whereas 30 percent of the customers presented with the limited selection made a purchase, a mere 3 percent of those who saw the extensive selection bought something.”

The whole experience counts: “When NeuroFocus tested the yogurt consumption process in its labs, they reached a surprising conclusion: the key part of the process (as far as the consumer brains they tested are concerned) is grasping and removing the foil covering over the top of the container. The finding that pulling off the foil lid was the most significant sensory element in eating yogurt was important to the yogurt-making client that sponsored the work, but it’s an important lesson for all product marketers. Don’t assume that the obvious product characteristics are the only important ones. With yogurt, one would logically expect taste, texture, and aroma to outweigh mere packaging considerations; in this case, they didn’t.”

Association is critical in branding: “Samsung is a master of subtle branding via sponsorships. Lately, the firm has been branding airport electrical charging stations. Can you imagine a better way to link an electronics brand with a positive association? Imagine the relief felt by the owner of a smartphone with a dying battery, who, stuck in the airport without a charger, finds this electrical oasis!”

Rivalries create loyalty and unity:  “Even as Etsy itself turns into a huge enterprise, Kalin calls himself not CEO but crafter in chief and talks about “the big companies that all us small businesses are teaming up against.” This rhetoric seems laughable for a company that has raised tens of millions of dollars in venture capital, but so far it seems to be working. It’s us (Etsy and the artists) against them (the suits and big business). Have you been able to make customers feel different from those of your competition? Does your brand have a tribe? Have you been able to define an enemy group that strengthens the cohesiveness of your own? If you can accomplish this and fan the flames of rivalry, you’ll create not only more loyal customers but also brand advocates and evangelists.”

Create an illusion of progress to get people moving:  “One of the most interesting findings was that the mere illusion of progress caused people to buy coffee more frequently. The experimenters issued two different cards: empty cards with 10 spots to stamp and cards with 12 blanks of which two were prestamped. In both cases, 10 stamps were required to earn the free coffee. Despite the identical number of stamps needed, the group that started with apparent progress on their card bought coffee more frequently than the empty-card group. A plane ticket that requires using 25,000 frequent flyer miles would not seem as “close” as one that requires 35,000 miles but in which the customer starts with 10,000 miles.”

Trust can be increased simply through a claim:  “Do you think one short sentence at the end of your ad could cause a major increase in the level of trust customers place in you? Believe it or not, it’s true. Researchers found that placing the following statement at the end of an ad for an auto service firm caused their trust scores to jump as much as 33 percent! ‘You can trust us to do the job for you.’”

Prime cooperation by asking for a small favor:  “From time to time, all of us need to persuade people we don’t know personally to do things. A salesperson wants to close a deal. An office worker needs to persuade the new computer technician to fix her computer first. A fund-raiser hopes to get a potential donor to make a pledge. Our natural instinct in such situations is to avoid asking the individual we want to persuade for any favors other than the one that’s important to us. After all, the only thing worse than being asked for a favor is being asked for multiple favors, right? The expected and seemingly logical answer, that asking for more than one favor is unwise, is wrong. Behavioral research shows us that sometimes asking for one favor first can greatly increase the probability of success with the second favor!”

Subtle environmental cues affect subconscious actions:  “One experiment involved asking mall shoppers for a charitable contribution immediately after they had gone up an escalator or gone down an escalator. They found that 16 percent of the people going up contributed, more than twice the 7 percent contributed by subjects going down. A control group of shoppers walking on level ground not near any escalators contributed at an 11 percent”

The power of one is greater than the power of many:  “The subjects shown two children donated 15 percent less than those shown the single child. In a related experiment, subjects shown a group of eight starving children contributed 50 percent less money than those shown just one. This tendency may be hardwired. We are drawn to stories about one person in crisis (a great example was the national fascination with Baby Jessica, who was trapped in a well), but mass starvation or rampant disease barely engages us.”

Actual numbers persuade more than percentages:  “Another experiment showed that people believed cancer to be 32 percent riskier when told that it kills 1,286 out of every 10,000 people, versus 12.86 percent of people. The difference is that numbers imply real people. A 2 percent chance of misfortune sounds low, but if you hear that 2 people out of 100 will be harmed, your brain imagines two actual people suffering an injury. If you want to convey a positive message, use real numbers, not percentages. If you are describing a benefit of your product or service, expressing it in terms of absolute numbers will maximize its impact. Good: 90 percent of our customers rate our service as ‘excellent’ Better: 9 out of 10 customers rate our service as ‘excellent’”

Provide a decision shortcut through one simple reason:  “If you are selling a complex product like an automobile, give the customer a simple reason to buy your product. Make the specifications and features available to the consumer, because people like me will want to analyze the details; however, don’t lead with six new features or 10 reasons to buy the product. A simple message, like “#1 in customer satisfaction” or “more safety features than any car in its class” will go farther in steering the consumer down the intuitive decision path. After all, if the car I’m buying is #1 in customer satisfaction, do I really need to sweat the details? Maybe not. An even simpler approach is a nonverbal emotional appeal, such as showing the car in a setting that exudes wealth, glamour, and luxury.”

Emotional appeal is superior to rational appeal:  “The UK-based Institute of Practitioners in Advertising (IPA) maintains a data bank of 1,400 case studies of successful advertising campaigns submitted for the IPA Effectiveness Award competition over the past three decades. An analysis of the IPA data compared the profitability boost of campaigns that relied primarily on emotional appeal versus those that used rational persuasion and information. Campaigns with purely emotional content performed about twice as well (31 percent versus 16 percent) with only rational content, and those that were purely emotional did a little better (versus 26 percent) than those that mixed emotional and rational content.”

Build credibility through showing reality:  “Overstock keeps sold-out items in their results and flags them as ‘Sold Out.’ Some might find that a risky move—showing customers an unavailable but interesting product might cause them to try to find it elsewhere. Or customers might decide to buy nothing at all if an attractive product was sold out. Nevertheless, these “Sold Out” indicators add credibility to the other scarcity warnings and add a sense of urgency to the shopping process.”

Feedback Juice is written by Kevan Oswald, a marketing strategist, father of five, lover of golf, and hater of salad. View more posts